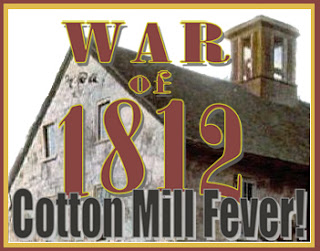 As the nation commemorates the 200th anniversary of the War of 1812, the John H. Chafee Blackstone River Valley National Heritage Corridor plans to celebrate the impact of the War on the Valley and the impact of the Valley on the nation during that time.  "This is a Blackstone Valley story," says Ranger Kevin Klyberg.  "The economics of the war as well as the trade embargoes leading up to it acted as the catalysts that led to the 'revolution' part of the Industrial Revolution."  Klyberg explains that trade restrictions spurred "cotton mill fever" across the Blackstone Valley and "transformed an area with a handful of experimental mills to one with dozens of mill villages across its landscape.  As the success of these mill villages spread, it led to a new system of manufacturing for the nation that historians now call the Rhode Island System of Manufacture."

The Heritage Corridor is planning a new exhibit for later in 2012, as well as public programs related to the Valley's role.  The first of these will be a lecture by Ranger Klyberg as part of the Ranger Talks series at the Museum of Work & Culture in Woonsocket on March 11 at 1:30 PM.

Watch for details of upcoming programs on our new War of 1812 web page.
Posted by Blackstone River Valley National Heritage Corridor at 12:15 PM