Don't Miss The Rally For The Valley! 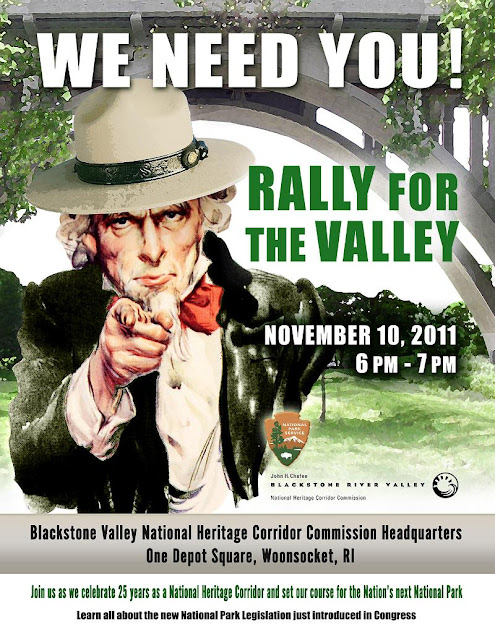 Posted by Blackstone River Valley National Heritage Corridor at 9:58 AM 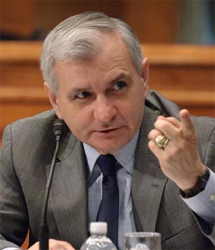 "I am proud to introduce legislation that will create a new national park unit within the Blackstone River Valley, ensuring the protection and promotion of this vital historical, environmental, and educational resource – all while helping to promote our local economies,” said Rep. Cicilline.

By ETHAN SHOREY, Valley Breeze Staff Writer (Click on the link below for the full article)

Frank Matta, left, and John Marsland, of the Blackstone River Watershed Council/Friends of the Blackstone, show off the 600-pound aviation tire they helped pull from the Lonsdale Marsh last month. The tire is the last one known to be in the marsh.
CUMBERLAND - The Valley Boys saved their most stubborn haul for last. At 600 pounds, the passenger jet tire was such a beast it had to be fished out by six men and a loader. It is thought that the giant aviation tire had been lodged for more than 30 years in the Lonsdale Marsh, a once-polluted zone first targeted for cleanup all the way back in 1972. Several of those who helped hoist it out this summer recalled seeing it as children... FULL STORY
Shorey, E. (2011, August 3)). 'Valley Boys' pull biggest, baddest tire from Lonsdale Marsh. Valley Breeze. Retrieved August 10, 2011, from http://breezepapers.com/2011/08/03/cl/valley-boys-pull-biggest-baddest-tire-from-lonsdale-marsh
Posted by Blackstone River Valley National Heritage Corridor at 10:06 AM

What A Wonderful Time Of Year To Be In the Valley! 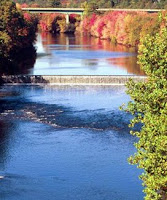 October and November are busy months here in the Blackstone Valley.  Whether you are looking for something to do with children, a visit to a historic site, a conference relating to the Valley, or a night out, the Heritage Corridor and our partners have a lot in store for you this fall.  Check out our event listing for festivals, conferences, tours, walks, benefit nights, and so much more!

Of special note this season are the following conferences related to topics of importance to us.

Each year, the Finish Line Celebration provides an opportunity of athletes, volunteers, and spectators alike to share food, music, photos, and a lot of stories about the day's adventures. The Celebration started at noon, with about 1000 participants, onlookers, and volunteers gathered to celebrate.
Posted by Blackstone River Valley National Heritage Corridor at 3:51 PM